Calling all WWE fans – Wrestlemania the board game is here

Peter Jenkinson December 6, 2019 Uncategorized Comments Off on Calling all WWE fans – Wrestlemania the board game is here 449 Views 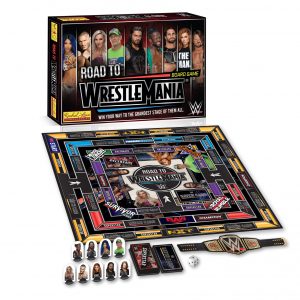 WWE fans across the UK now have the opportunity to become part of the electrifying global pop-cultural event, WrestleMania, by playing a new WWE board game.

Manufactured by award-winning board game creator Rachel Lowe MBE, WWE: Road to WrestleManiasees players choose to become one of their favorite WWE Superstars including John Cena®, Roman Reigns®, Seth Rollins® and Becky Lynch®. Players need to rack up the wins at WWE’s most popular shows including Raw, SmackDown and NXT to reach the Grandest Stage of Them All® – WrestleMania. Using their best moves to defeat other players, who will be crowned the WWE Champion and get their hands on the prestigious WWE title?

“WWE has a passionate and devoted global fanbase who are drawn to these fantastic athletes and the excitement of the dramatic, action-packed storylines,” said Rachel Lowe.  “I’m thrilled to work with WWE and bring this game to life so thousands of fans across the UK have the opportunity to become part of this exciting world.”

Toyologist Pete Jenkinson regularly writes about toys in national newspapers like The Sun and The Mail. This super-dad has an unmatched passion and dedication for trying and testing the latest, coolest and most interesting offerings from the world of toys.
@toyologist
Previous Six new LEGO Hidden Side sets for 2020
Next Bye bye Virgin trains there’s a new operator incoming