Blockbuster Video – WOW what a difference!

Opening its first branch back in 1989 (Shirley Valentine, Rain Man, Cocktail, Ghostbusters II) and grew to a whopping 9,000 plus stores by 2004 and then, it began. New rental and streaming services started to appear and, as of last week when an Australian outlet conceded defeat and shut up shop just one outlet remains. Tourist are making a day of it at this, the last outpost, Deal in Oregon.

If you can’t make the schlep it over there to pick up one of their various lines of merchandise, there is a new game out from the chaps at Big Potato and it comes packed in a VHS clamshell case. The Blockbuster Game is, as you may expect, is a movie based game where two teams compete for bragging rights. From quick-fire questions and charade style quizzing it all takes place on a shrunken replica of a Blockbuster parking lot – we like that touch plenty. 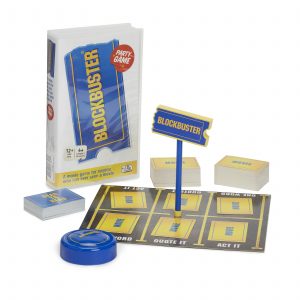 Toyologist Pete Jenkinson regularly writes about toys in national newspapers like The Sun and The Mail. This super-dad has an unmatched passion and dedication for trying and testing the latest, coolest and most interesting offerings from the world of toys.
@toyologist
Previous C’mon Barbie lets go Party – Celebrating six decades of an icon
Next TechUp showcases the future of play at SXSW 2019