Rob Taylor-Hastings September 7, 2017 Toy Reviews Comments Off on BB-9E joins the Astromech line-up in the next Star Wars outing 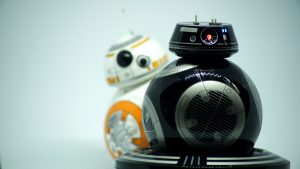 Move over BB8 there’s a new kid in town! 2015 saw many of us amazed at the new astromech droid. How is it cuter than R2-D2? How on earth does its head stay on? Two years later, BB8 is commonplace amongst Star Wars merch and just when he was resting on his spherical laurels ‘BAM!’ BB-9E rolls into view. Behold the newer, darker, flashier astromech released just in time to ride on The Last Jedi‘s hype train.

BB-9E lands with a new smart phone app and if you own Sphero’s BB8 you’ll see be familiar with the bulk of the features. ‘Drive Mode’ turns your BB into an R/C car whereas ‘Explore Mode’ sends the little tyke scuttling off on its own adventures. New features such as ‘Draw a Route’ and ‘AR Worlds’ are a welcome upgrade that also enhance the playability of the old BB8. The upgrades continue on the outside as well, the head piece now houses several LEDs that are powered via magnetic conductors and BB-9E comes packaged with the new ‘Droid Trainer’. It’s basically a treadmill that lets your BB unit toddle along without getting lost under the sofa and turns what can be a manic little droid into a charming, static desk toy. 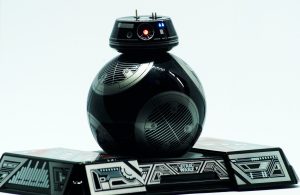 Sphero’s BB-9E is a great step up in technology and playability from their BB8. It’s a must have for collectors and great robo-pal for the younger generation not to mention how darn cute the two BBs look together!

You can find the droid you’re looking for on Sphero’s website today for £149.99

This actor & presenter is a proud Midlands lad who fled to London over a decade ago. Having grown up on a healthy diet of Power Rangers, Transformers and Thundercats, Rob is a sucker for anything that goes 'pow!' And 'Zap!' A film producer and radio savvy man this Toyminator really knows his R/C's from his elbow.
@@rtaylorhastings
Previous LEGO City into the Jungle
Next Slither.io the sneaky snake-ish style game gets the toy treatment

Have you ever wanted to build your own genocidal maniac?  Well, with Wave 1 of …