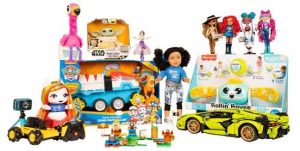 We have LEGO Lamborghini, a pooping Flamingo, a dancing unicorn and an animatronic doll of ‘The Child’ from Disney’s The Mandalorian (aka Baby Yoda). Yes, it is probably the most eclectic collection we’ve seen assembled by the UK’s leading toy retailer and we love it. Some research they conducted* revealed that all this extra time we’ve been spending at home has generated a strong sense of nostalgia for our favourite toys. Half of parents reminisced about their old toys at some point during lockdown, and, as a result, more than a fifth plan on gifting their kids something that conjures up memories of their own childhood this Yule.

This increase in digital shopping habits led to the retailer’s recent decision to say farewell to its bi-annual printed catalogue. However, children (and kidults) wondering how they will compile their Christmas wish lists can relax as Argos will still be producing a printed Christmas Gift Guide, So post-it notes and felt tips to circle at the ready.

Rather than presenting children with vast sacks of presents on Christmas morning, parents appear to be more selective with their toy choices, opting for quality, long-lasting items. A quarter of Brits (25 per cent) expect to spend over £200 on their most expensive toy this year, with the LEGO Technic Lamborghini (£350.00) likely to make wish lists across the country. Sales of toys costing over £300 have risen 60 per cent year-on-year** at Argos, with nearly a third (29 per cent) of parents saying they would buy a toy worth more than £100 if they felt they could also enjoy playing with it, and 59 per cent considering a toy’s longevity before making a purchase.

Juliet Ward, Head of Toy Buying at Argos, said: “With so much time spent inside during lockdown, the nation has rekindled its love for toys, turning to them now more than ever to keep themselves entertained during what has been a difficult time for many. This year’s top toys list offers a huge variety of new products, ranging from toys inspired by the biggest TV and gaming franchises to bizarre – but crucially, fun – pooping animals.

“When we craft the list of our top toy predictions for the year, we always try to accurately gauge the ‘toy crazes’ that are set to make thousands of wish lists. This year it’s heartening to see so many toys that will encourage families to spend time together, whether that’s putting together a LEGO Lamborghini or reminiscing over the Mario games of the 80s and 90s.”

“This year, children have spent much of their time locked away at home, unable to visit friends their own age and having birthday parties over Zoom. It’s meant a great deal of time has been spent with their immediate family, and while this is a good thing, the toy list also includes products that allow children to get back to simply being a kid – whether that’s a dancing unicorn or a flamingo that chirps about going to the toilet.”

Toyologist Pete Jenkinson regularly writes about toys in national newspapers like The Sun and The Mail. This super-dad has an unmatched passion and dedication for trying and testing the latest, coolest and most interesting offerings from the world of toys.
@toyologist
Previous Leaked LEGO set has fans in a (Be)Spin
Next Funko Pop figures – Your weekly wound-up