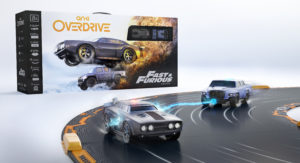 We love slot-car racing, we’re even bigger fans of slot-free racing, we are massive fans of A.I. powered set-up Anki. If you wanted to punish us for something you couldn’t do much more sever than take our OVERDRIVE set away. So, finally, after an achingly long wait, they’ve actually signed a licencing deal.  Car firms across the globe must have been beating down their doors to get involved but Anki have announced this deal with the biggest film franchise ever, Bravo!  So here it is, a special edition Anki set based on the Fast and Furious movie franchise. Offering all the same kind of Anki play it features two AI cars based on vehicles driven in the films, namely Dom’s Ice Charger and Hobbs’ MXT. The special version of the controller app for iOS and Android continues the F&F theme with characters including Letty and Tej as AI opponents or sidekicks. And yet there is more, a new piece of Fast & Furious themed track with a power zone to  trigger a blast to disable anyone close. All that Anki track you own as well as the cars are compatible – Anki Overdrive: Fast & Furious Edition will be available from September priced at £169.99. SEPTEMBER! 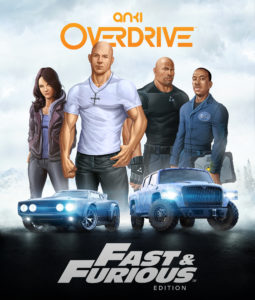 Toyologist Pete Jenkinson regularly writes about toys in national newspapers like The Sun and The Mail. This super-dad has an unmatched passion and dedication for trying and testing the latest, coolest and most interesting offerings from the world of toys.
@toyologist
Previous Mr Gorilla still has a way to go in the London Marathon
Next Forza taps into nostalgic thrills