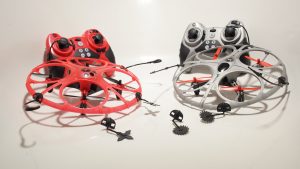 Sharpen the spears and fuel the engines! Sky high combat is here and you’re going to want a piece of the action! The Air Wars Battle Drone two pack comes with a ‘one touch, take-off and landing’ stabilised Quad design for both drones, which is exciting enough, but taking a look at the ten different weapons is what gets the heart racing.

The clip system allows you and your rival to mix & match load-outs with spears, hooks, shurikens, even circular saws. Once you’re kitted out, your drone looks more than a little sinister!

The combat is genuinely exciting. The two drones are so stable, they really allow you to line up attacks and Air Wars has got novices covered with four ‘auto-attacks’ built into the controllers, the result is ‘smashing’!

Our office was filled with cheers and whoops when a well aimed ram sent weapons flying off and drones tumbling onto desks (sorry Megan) this simple concept kept us entertained for hours!

If you think Robot Wars mixed with jousting, mixed with aerial dog fights you’ll have a good idea of what to expect whizzing around the living room and I can see great potential in the Battle Drones. Should these take off (pun very much intended) I hope to see additional weapon packs and other customisations for sale. These could be the new Beyblades, he says, dating himself horribly. And, if they do I shall be waiting for you in the arena, Battle Drone at the ready!

This actor & presenter is a proud Midlands lad who fled to London over a decade ago. Having grown up on a healthy diet of Power Rangers, Transformers and Thundercats, Rob is a sucker for anything that goes 'pow!' And 'Zap!' A film producer and radio savvy man this Toyminator really knows his R/C's from his elbow.
@@rtaylorhastings
Previous Rainbow blanket is essential for your existence
Next Star Wars Force Friday Episode II