Charades with words anyone?

Deej September 11, 2017 Uncategorized Comments Off on Charades with words anyone? 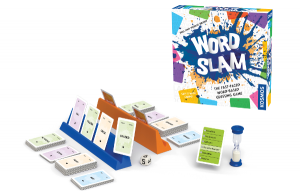 What if you and your friends had a vocabulary of just 105 basic words? That’s the starting point for this deceptively simple-looking game… The words are printed on identical sets of cards, so two teams can search for useful language at the same time. The aim is to race through the cards in a frantic attempt to communicate a randomly-chosen secret word – with no talking, miming or acting…
So! If you can picture that simple set up, then you’re halfway to envisioning the Thame and Kosmos game Word Slam. The only thing that’s missing from the picture is the hysteria and exasperation that ensues as your teammates furiously make wrong guesses, since the secret word could be an object, a character, a place, a job, an animal or an activity.
Truth be told, Word Slam isn’t really about words at all: it’s about being on the same wavelength as your friends. The joy or frustration you feel while hurrying to express yourself is proportionate to their helplessness while trying to guess what the heck you’re thinking!
Fast, funny and furious, Word Slam needs at least four players to get the most out of it, and might have been better in a pouch or smaller box so you could take it places. Also, the cards only orientate correctly one way – which is a bit annoying given the state they can get in – but these are very minor grumbles! All in all, Word Slam is a definite hit.
Any guesses as to what word these two teams were attempting to guess? 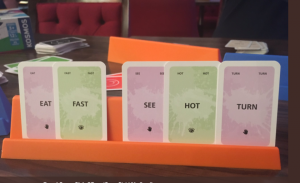 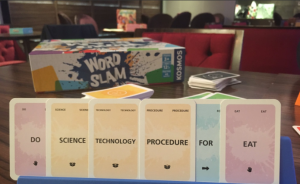 Magician. Hypnotist. LEGO fan... You're not likely to meet many people more happily geeky than writer Deej Johnson! Every now and then, though, he inflicts his interests on others, so here we let him write about LEGO... Better that than watch a card trick.
Previous Animals with attitude – Feisty Pets are all Jeckyll and Hyde-like
Next They’re fruity, they’re loopy, they’re a Unicorn inspired breakfast cereal…